An epic commercial backed by an epic team!

Aditya Birla Group launched its third corporate campaign under the title ' Let's Reach For the Sun'.

Our task was to incorporate the shift of strategy into a superlative creative language which whilst maintaining the thematic visual continuity with the previous films, yet had to speak a fresh story. Using music as a metaphor we created a board that brought to life the essence of the brief.

VGC scouted for the right director around the globe and eventually Mathias Zentner, a Graphic Designer turned into an acclaimed Director.

True to the global theme of the film, the entire talent pool of over 200 people came together from all parts of the world. Whilst the director was German, the cast was from China, India, Thailand, Europe and United States. 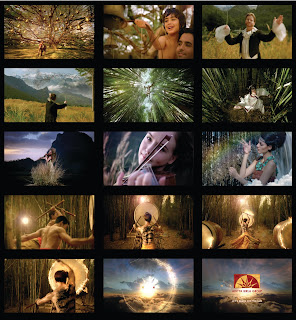 The key piece of the film; the spell binding musical orchestra, was composed by Adelphoi Music – a London based music and sound design production company. Their body of work has ensured them awards from D&Ad, Clio, Promax, Emmy, NY Festivals and Mobius, to name a few.The film was shot in various locations in remote parts of Thailand recreating geographic diversities representing different cultures. The sets were designed by Suchartanun 'Kai' Kuladee – a Hollywood based Art Director who has earned the distinction of working on two Oscar nominated films – Rocky and The Beach.

The costumes were styled by Daniela Benzalla of Italy, OMG the production Design Company was Indian along with a team of designers from Singapore, rigs and specialized equipment from China and a German post production company made the film truly a multinational creative expression.

Posted by Vyas Giannetti Creative at 9:26 PM No comments: