Recognition is always good to have, but this one is rather special and we are happy to share with you that CMO Asia ranks VGC’s Preeti Vyas amongst India’s Greatest Brand Builders, in its third and latest edition. This book has been conceived, researched and documented by Dr. R L Bhatia, a familiar figure in the knowledge space of the world of branding. The recognition is for the entire team who has always wanted to push the envelope further and certainly for all our clients who have seen and acknowledged the strategic and qualitative benchmarks we have always delivered. 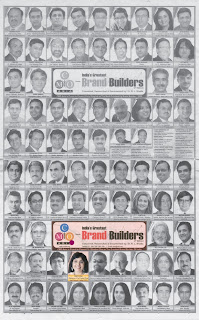 Posted by Vyas Giannetti Creative at 10:45 PM No comments:

This years ceremony took place on a warm barmy barbeque evening at a downtown haunt in Worli. The salubrious venue near the seaface on the opposite side of the Arabian Sea was selected for this gala event.

Most notable VGC staff and local celebs were present. Some looking cool, others not so, some there to network but most anticipating an award of somekind therefore came dressed for auditions for Saturday Night Fever.

The atmosphere was tension filled with anticipation. People showed great patience sitting around waiting for the proceedings to commence. But some nerves did get frayed so they hit the bottle and helped themselves pushing the barmen out of their way. It was every man, women and dog for himself.

After filling their glasses, they all calmed down.. Then it was the mens turn to get some drinks. Some seemed to have had a barrel full even before the first award was announced. 3 guesses are not needed, but here is a clue, look into my eyes, I am fit to drive!

The dessert was dead good and left a smile on most diners faces!

On with the awards ceremony. The comperes for the evening were Devi and Gary assisted by Kanti.

Here some of the highlights

KESHAW: Best kept mustache Keshaw, the comb is for the tache, not to shove in and rake your ear out!

RUMEENA: Most talkative does a little Ali shuffle in accepting her award.

SHANKER: Managed to walk in a straight line to collect Fastest Driver

DEVI: won What does Devi need? We are still trying to work that on out!

GARY: collected, If it fits, wear it! 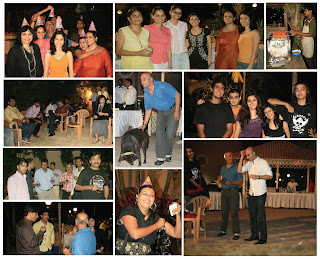 There was a minor contra-temp when a delegate who hadnt won an award mis-behaved. The judges must have penalised him for making a beeline for the chicken kebabs! A court injunction means his name and identity can not be revealed to the public but the 4-legged furry thing from the Reception department took his protest onto the stage. He had to be escorted off by the security staff. LUCKily, he didnt put up much of a fight though some were aghast at him loosing his cool.

Whilst the awards were taking place, our resident Snapper of the Year winner was busy clicking away to show the true spirit (as well as the vodka) of the occasion which put most delegated in a 'good mood'.

Posted by Vyas Giannetti Creative at 5:34 AM No comments: